Then the three secrets of a millionaire mindset. Help you to make a future millionaire, financially independent and teach you how to spend your salary productively.

These principles help you to make your savings automated. Which gives you relaxation from budgeting, self-discipline, and saving your time from every month’s work for continued savings.

When you automate your savings. Your only work is to choose the best proposal for yourself. And leave all things on the automation process.

A question arises in your mind, is it possible? This guy joked with us. But I am right, trust me. I also don’t believe in it. But when I read The Automatic Millionaire written by David Bach.

The book inspires me to accept that the principle works.

According to David Bach. From starting your savings from $5 anyone will be a future millionaire. He gives the example of a couple Jim Mclntyne and Shu

Jim was a middle manager in a utility company; his annual income was $40,000 and Shu was a beautician. Jim was a student of David’s classes.

One day David requested Jim to fix a meeting with Jim & his wife to know their financial condition. Because Jim thought about retiring at the age of 50. Jim agreed and fixed Sunday, a day for the meeting.

On Sunday Jim and Shu arrived on schedule. Jim was in a polo T-shirt and Shu’s glossy face surprised David. They look like newly married couples.

Before David started, Jim started to explain his retirement plan. What he will do after retirement.

David stopped him, sir, you are only 50 years old and planning for retirement. Because I mate with various clients, they do not even think about their retirement in their late 50s.

Jim and Shu looked at each other after listening to David. And asked David, do you think we should not take retirement?

David said yes I want to know why you think to take retirement, are you financially stable and think you are rich”

David was impressed to see that they are millionaires. David wants to know how they do this or the secret behind this.

Jim simply answered him. I only remember some savings lessons which my father taught me.

These are, your debt should never exceed more than half of your savings. Pay yourself first then pay to others. Observe your spending, and try to minimize it. Do automated your savings.

These are some methods that were applied by Jim in his early life. And being a millionaire at the age of 50.

The 3 secrets of a millionaire mindset. 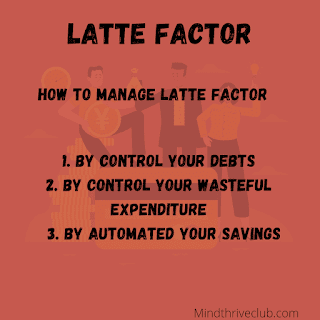 We always think that we will earn more and save more but our spending behaviour is just the opposite. Our behaviour works on earning more and spending more.

More earning brings more expenses in our life. The proportion in which our salary increases, in the same proportion our needs increase.

For example, John joined a company in the post of sales executive. When he started his job his salary was $4,000. After working 5 years he will be promoted to the post of manager and now his salary will increase to $10000.

In $ 4000 he easily survived with his family. He was not under any financial stress. When he gets $10,000. His life and living style will change.

Now his children study in private schools, he bought a costly car and owns a big house. But his financial stress is more than in the past.

As a result, more than half his was deducted on the first day from his salary account.

Which brought him to the same condition. Which was when he found a $4000 salary.

The simple reason is that he had no savings. He spent all his money to acquire his needs.

Does the question arise how do you manage your latte factor? For this, there’s one condition: self-discipline. You have to strictly follow the rules.

By applying some methods you may mitigate the latte factor.

1. You control your debts, by a study finds that your debts should not be more than 40% from your earnings.

2. You control your wasteful expenditure, when John wants to buy a car, instead of buying a new car he should prefer a second-hand car.

When he buys a big house, he should first consider what is the need of his family and how much big house they need to survive.

And if I take the annual return of the stock market which is 10%. After 65year he will get $1.2 million.

This is a huge amount in comparison to $5. Which was not done by John and in return he found financial stress.

But Jim focused on these points at an early age. Which makes him a millionaire.

2. Pay yourself before paying others- 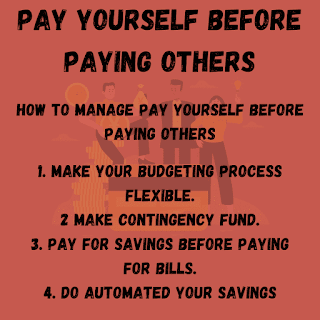 After study about how to mitigate wasteful expenditure and never exceed your debt more than 40% of your earnings.

Now we come on the step to know how to pay yourself before paying others. Our savings and expenditure process is conventional. We rely on budgeting for this.

I do not say budgeting is a wrong process. But I found that when we budget something it restricts us to a boundary. When we budget our expenditure and saving we demoralise our various needs and wants.

For the saving, we have to compromise on many of our desires. Like when we do dieting we leave various foods which we like and make a living by eating less.

But it is not the right way. Because it creates a revolution in our intuition. After some time we leave budgeting and do excessive expenditure to give peace to our intuition and mind.

So the question arises how do you pay yourself before paying others?

1. Make your budget process flexible. This means if the expenditure is essential add some money to your budget.

You divided your budget planning into two parts: short term (monthly) and long term (yearly). Like the government does by preparing contingency funds (emergency funds made by the government of India) to manage disaster situations. When some extra expenditure has come it is managed by an emergency fund.

The best thing is to fix it for a year. It gives you two benefits, first, it restricts you to use it. Second, give you a good return of approx 6%. If you do not need it.

3. Pay to your savings first then pay your other bills. Because of the credit card culture. You loaded yourself with an extra burden of financial stress.

4. Do automate your saving. This means when you put your savings on automation. Your salary will come, and be automatically deducted from your salary. Like your debts.

This shows us Jim’s diverse approach to saving. He did not invest all his money in one source of investment.

He diversified his investment to decrease the level of risk. Because the financial market is unpredictable, sometimes it gives you more and sometimes it takes all from you.

3. Do automate your savings- 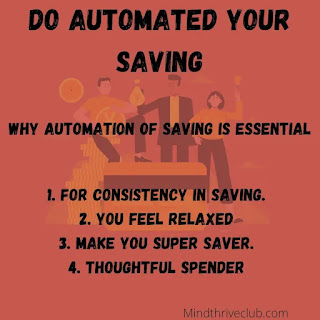 As we discussed above this term many times. Which gives a rough idea. What is this?

And the other way, how do we know about the automation process?  Because of credit card culture or EMI culture.

Most probably our salary is deducted because of these two. But it works in the savings process also.

For example, when in India the pension to the government employee was stopped. A wave of fury ran across India. I do not understand why.

So, I talked with my father. Who was a government employee? What was the reason behind this fury?

He explained to me, In the Indian pension system 10% is deducted from employee salary and in the same proportion the government contributes to it. Maybe now for central government employees of India, it will increase to 14%.

This means this automatically deducts from your salary. And you have nothing to do.

The benefit of automation.

The pension will be revised every 6 months. As the government increases the dearness allowance it includes in your pension.

In India, it is a handsome amount for an old man and his wife. It is the guaranteed income that you found till your death. And after you for your wife.

2. The real benefit is you are habituated with the salary you found after the deducted amount for your pension and taxes. Means you know how to survive on that income.

Your other expenditures and savings are based on that amount. Like your children’s education, house rents, and other taxes.

On the other side, you build a huge amount for your future.

3. The consistency of saving will be maintained. If you have to do self savings.

Many times you observe unexpected expenses come. And under compulsion, you have to spend that money. So, automation of savings protects you from halting the process of savings.

From the pension system, I want only to understand how the automation process works.

You have to set it up just once, it will work automatically. Else you will not have to deduct the check every month. Neither do you self discipline, give time for it or budget.

Like Jim and Shu. Jim started saving from the early age of 25. He was started from 1% of his salary and gradually raised to 15%.

The automation process helped him to make a millionaire.

So, with the help of Jim and Shu’s story, you know about the secret of a millionaire mindset. In short, the three secret factors are the latte factor, paying yourself first before paying others and automating your saving.

By following this step one by one you change yourself into a super saver.