Why do we fail in adopting new habits? The reason is our 4 tendencies.

You are the only one in this whole world. And this is a fact. The abilities you have, the potentials that no one else has. You are unique. And you should believe in this. 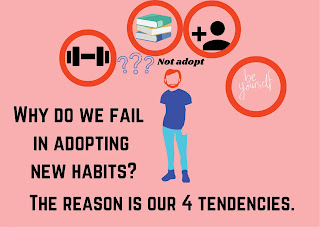 If you think that the method works for others, why fails you?  So I will tell you to never blame yourself for this or keep any self-doubt.

Now, as often people take notes from their laptops in class because it makes it easy.  But you have problems using a laptop because you find it easier to write on paper.

Do you know that J.k. Rowling, a Nobel prize winner and writer of the Harry Potter series, gave preference to pen and paper in place of computers? That secret she revealed in 2009 when her first tweet from her Twitter account was made in the same year.

The other example is Woody Allen. In the 44 years between 1969 to 2013, Woody Allen directed 44 films and received 23 academy awards. Never used a computer he completed all writing on a manual typewriter.

Everyone has their formula for living their life. Which does not match with others. So, how will the same technique work for you, who works on others?

This is the biggest failure behind our Success strategy. Different people have different emotions, habits, capacities, and purposes. So the same formula applies for the different person does not work.

That’s why we fail in adopting new habits? and the four tendencies are the reason behind our failure. Because habits are one of the jacks of our life. Which helps us in our upliftment.

Habits are our routine work which we do daily sometimes we find it difficult to adopt a habit because the techniques that others use are difficult for you to do.

But it’s not your fault. The only thing is that everyone has a different capacity to adapt Habits. Maybe what you find difficult may be very easy for others.

Is it easy or difficult to practice a habit, there is another reason for it. And that is the level of expectation associated with the region’s habit.

If there is a high level of expectation with a habit, then you will positively respond to that habit.

There are four types of people who respond according to habits. First, come to the Upholders, then the Questions, then the Obligers and lastly the Rebels.

These are the four types of tendencies that influence our attitude, how we see things and how we behave. And the most important thing is that this will decide how you will form the habits.

The four types of tendencies.

Upholders want to live up to both their inner and outer expectations because they like it.  Now no matter how pointless it may sound.  These people avoid mistakes at all costs as much as possible.

Their expectation is of a very high level. This is the region where upholders quickly adopt any habits. Upholders have a daily to-do list. Which they try to complete as quickly as possible.

Their commitment is so strong that even no illness or physical injury can stop them.  However, most of the upholders focus on their inner expectation more than the outer because they give value to their self-preservation.

Self-preservation motivates them to fulfil their expectations. For example, an upholder who is thinking of exercising can simply say to his friend “Sorry, I can’t go out to lunch with you.

Another quality of upholders is that they follow their rules very strictly.

Questionnaires have doubts about their expectations. These people respond to expectations only when they see some logic in them.

Questioners live with the logic that every action must have a purpose. And then he prepares his inner expectations. So that he can follow them.

Like Mohan, Mohan was a patient of obesity. He visited a doctor for advice to reduce his weight.

The doctor advised him, for reduce his weight you have to leave fast food, walk in the morning for at least 30 minutes, take a high protein diet instead of carbohydrates, and divide his full-day diet into 6 small portions.

But Mohan was not satisfied with the doctor’s advice. Because advice does not satisfy his logical tendency and its existing habits.

So, he started showering questions on the doctor. Sir, why do I walk in the morning, why not in the evening? Why take a high protein diet instead of carbohydrates, it does not fill my stomach? And so many questions.

Therefore because of questionnaire tendency, if the doctor can satisfy Mohan with his answer. Then there is a possibility of acceptance.

In other words, Mohan finds a habit to be reasonable, then he adopts it.

But if he does not find any logic in any habit or rule, then it is very difficult for him to adopt that habit.

Questionnaire tendency is a good tendency. But if it crosses the limits, it makes you full of suspicious minds. You always stand others in your suspicious zone.

Next come the obligors, who always want the happiness of others. This means they are obliged. And ready to leave their work for their friends, family or any person.

These people find it difficult to fulfil their inner expectations such as taking a healthy diet.  The mindset of obligors is such that these people can break promises for themselves but not for others.

And this is the region that obligers depend on others to form new habits for themselves.  Always because they need some external source for motivation.

Now just take Grace. She is a young professional who wants to inculcate the habit of reading. Although it is an inner expectation, Grace is unable to make up her mind for reading.

So she wants to join a book club where she can find people who can inspire her.

Chuck is a young boy who has just graduated and moved to a new city.  He has to arrange his wardrobe properly.

So, Chuck contacted a charity group. After donating his extra clothes to them so that those clothes could be useful to someone.

Now because obligers are dependent on others, these people often live under a lot of pressure. They can never say no to others.

Mike is a Marketing Professional.  Once his colleague asked him for help in finishing a report, Mike could not refuse. And the result was that his project could not be completed.

Not telling NO, put them aways in difficulty.

Last come the Rebels, who can avoid both outer and inner expectations. For them, their freedom is the most important, no matter what the work is.

These people like to work on their terms.  They cannot be forced for any work, if someone does, they will do the opposite.

Now take Rakesh who is a Rebel. He shares an apartment with his two friends. One day his friends asked “Will you do the dishes?’ But Rakesh was in no mood to do the dishes.

He is one of those people who don’t like to work on orders from others. Rebels find it difficult to deal with. But they can be tricked into work.

Like if parents want their Rebel children to do something, then they have to keep options so that they can get the choice. This is the only way to control Rebels that can solve your problem.

These people feel a lot of problems inculcate new habits. These people can be handled with care. 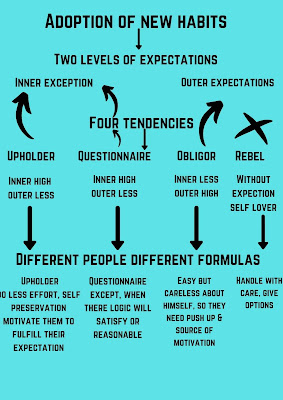 As mentioned earlier, what works for you may not work for others. So pay attention to yourself to know which technique will be best for you.

We cannot limit ourselves by saying that we cannot travel or we do not like spicy food. Because we can change our minds.  But if you come to know what is important for you, then you will be able to adopt Good Habits quickly and you will also be able to maintain them.

Here are some factors that will help you adopt any new habit effectively. Lark or night owl: These are the people who do better work at night than during the day.

And it’s hard to change that when you’re most productive because there’s an important role of jeans and edge.

It happens. Most college students are night owls while older people are larks. That means their day starts early.

If you are a night owl then you should wake up early in the morning and put in the habit of reading. And if you are a lark, you shouldn’t finish your projects by 10 PM.

Long runner short runner, and push runner: to create your habit strategy. It’s important to know, what comfortable places you can adopt any habits with?

If you take a long time to finish a project and make a strategy for a long time, you are a marathoner and a long runner.

But if you perform under pressure better and start work only when the deadline is near. Then you are a sprinter or short runner.

Carroll is one such short runner. who had to give a speech in front of the audience.

And she started preparing his speech at the time. When people came to the room and started sitting on their seats. Despite being under pressure, Carroll had prepared a very good speech.

Push runners are like lazy and procrastinating people. These people also do not do any work before the deadline.

The only difference is that they only want to push themselves to do work, and never feel regret. When they fail.

Under buyer or over buyer:  Yes, what you heard means the same thing. If you are an under buyer then you are not one to spend money quickly.

As if you would give the reason that you have to buy a new one. Running shoes are not needed.

But those who are over buyers need an excuse to shop like a new expensive trekker will say, “I want this, it will help me count the steps.

When it comes to habits, under-buyers”  One should keep in mind that. Money can be spent on some things. Which can be the right investment and buyers should understand that to adopt good habits. we do not need any equipment but a firm intention.

In this article, we discussed why we fail in adopting new habits. Knows about the Four tendencies. Which are the main reasons behind not adopting.

Lastly, we discussed the use of different formulas for different people. And find that we easily and in less time adopt new habits.

Nothing is impossible, only passion and better evaluation of himself is needed.

Better than before: Gretchen Rubin.