11 Habits that successful people avoid for finding success. When I think about success a conflict arises under my intuition. That success is to be a millionaire? Or success is to live our lives with joy? 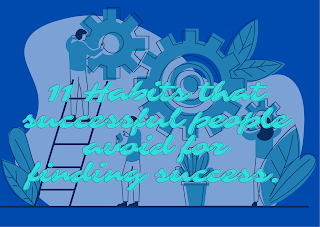 I am damn sure that 80% of us will go with the first one and the other 20% will go with the second one. But the truth is that all of us are hanging in confusion about it. Which is the best answer.

Because both are right in their place. Because we live in a materialistic world. So money is important.

But only money does not satisfy us. We need family, relatives and people.

Who admire us for our success. Because without being admired by someone. Our success’s sweetness will fade.

So the better approach is to make our success holistic.

In this article, I am going to discuss 11 habits that successful people should avoid for finding success. In light of the holistic approach ( emphasis on profession and personal life Both). 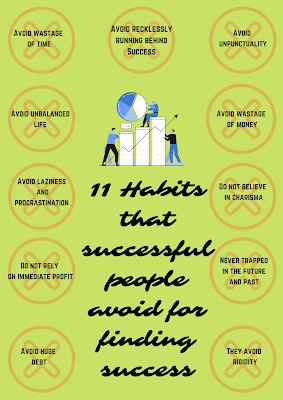 They always avoid wastage of time. They utilize their time like a traveller utilises a single drop of water in the desert.

The co-founder and CEO of SeatGeek tell CNBC. “I have an estimated number of minutes for all tasks and have written software to record when I begin and end each item. Each day, I challenge myself to hit an efficiency goal: the number of actual minutes divided by expected minutes. The best part of playing a game by myself is that I have every spot on the leaderboard.” (CNBC) (CNBC)

They know the value of time. So, they never spend their time uselessly.

They know that once time will pass. It will never come back.

Many of us recklessly run towards success to achieve it. But after some time. They stop running due to overhauling.

Which creates Distraction and inconsistency. Will be the reason behind failure. So, successful people Include pause in their daily life schedule?

It will give them the moment to recharge themselves inside and from outside.

Helps to maintain focus and enhance productivity. Arianna Huffington says. “Even if you take 20 minutes to do that, it’s more recharging than what so many of us do, which is eating lunch while working.” (CNBC)

Bill Gates, former CEO of Microsoft ” takes a break of one week after every six months called it thinking week for new projects. In that period he isolated himself from everything that distracted him”

They are always punctual. They know the importance of time. So they care about the time of others also.

For the time is money.

In Dr Yusuf Merchant’s latest book Happiness, he recounts an incident about Amitabh Bachchan that at the time, left him surprised.

Many years ago, Dr Merchant was organising anti-drug programmes at colleges with celebrities. One such function was being held at St Xaviers College in Mumbai and the guest of honour was Mr Amitabh Bachchan.

The function was supposed to start at 9 pm but Dr Merchant had learnt that celebrities were usually late so he had developed a practice of calling them two hours before the function.

Amitabh Bachchan was called in at 7 pm. Little did Dr Merchant know that Mr Bachchan would land up at 6:59 pm. He was shocked to see a celebrity of such calibre be this punctual.

In his book, Dr Yusuf Merchant writes, “I don’t know what shocked me more, my embarrassment or the timing of his arrival.

Noticing my awkwardness, he smiled to put me at ease. He sat down on a plastic chair in the audience section and his usual baritone asked, ‘Cutting chai Milegi?’” (source Indian express)

We always think that rich people waste their money. They are spending extravagantly. But it is not right.

Because the rich do expenditure according to invest and earned philosophy. They invest there,  from where they find a handsome return. Many celebrities live a budget life.

Like, world-renowned investor Warren Buffett has long been one of the richest people in the world, amassing a fortune of almost $90 billion, according to Forbes.

But instead of living in a megamansion, the businessman lives in a modest house that’s “worth .001% of his total wealth,” according to Business Insider.

5. Do not believe in charisma-

We always notice that, when we are in trouble, we think that charisma will happen and all our miseries will vanish.

So both components exist. It is not possible that only one exists. But leaving everything on god charisma or destiny is not the right approach.

For example, put a pot on a stove flame. And assume rice will be cooked. Is it possible, NO?

To cook rice you have to put rice and water in the pot. Look after it for a few minutes. Then our rice will be cooked.

So each goal needs hard work and commitment. Without these nothing will happen.

6. Never trapped in the maze of future and past-

Most people burn themselves in past regret or pass their life to thinking about making their future prosperous.

But both approaches are wrong.

Because we have no power to go into the past and correct our past. So, why do we engulf ourselves in past regret?

To be ambitious about our future is good. But only ambition does not make it fulfil.

So the better approach is to make our present solid. Which will work as a founding pillar for the future.

Rigidity gets you broken. Because the world is so tough. To survive in the world, flexibility in life is essential.

Make your life like a bamboo tree. The more a bamboo tree is bent, the more it bends. And when he is released, he goes back to his place.

Like, that successful people are so flexible. That they change themselves according to every condition of life. They survived in all conditions and conquered it to regain their position like a bamboo tree.

Successful people avoid making their debts huge. By a study, debts should not be more than 40% of your earnings.

If your debts are more than your earnings. You will never pay for it. You will be buried under the burden of debts.

So, always keep a close watch on the debts and regularly deposit all the instalments on time. Avoid more emphasis on credit card culture.

9. Do not rely on immediate profit-

Successful people do not rely on immediate profit. They invest for long term profit and passive income.

When you observe in a shop. A product is shown by a salesman and by the owner himself. There are lots of differences in both people’s approaches.

So to make yourself successful people. You should follow a long term profit approach.

Generally, most people fail in their job, because of laziness and procrastination. These two will lead to Boredom, loss of focus, increased distraction, and loss of self-esteem.

Which will lead to failure in our task. Successful people avoid it.

Successful people always maintain a balance between their personal and professional life.

They never take a chance that one overrides on the other. Because if balance turns into disbalances many complications arise.

Like, we do not concentrate on our work, consistency will break, and both slip from our hands like sand slips from our fists.

These are 11 Habits that successful people avoid for finding success. If you maintain a balanced approach between your professional and personal life, faith in yourself, and never give up.

We will never be defeated. There is a possibility that, because of various ups and downs. We bent like bamboo trees for some time. But again we will regain our position.

10 Habits that Improve your Mental Wellbeing