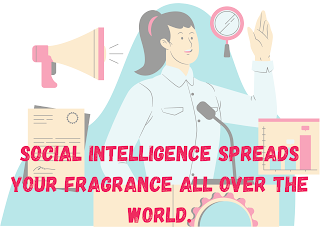 New tools for measuring the brain so that this talent is accomplished in a completely different way than IQ and EQ thinking.

What is social intelligence?

Social intelligence may be defined as” the ability to behave with wisdom and compassion, while maintaining inner and outer peace, regardless of the situation.”

Social intelligence helps us to take our principles, values, and connect our soul with our beliefs, our purpose in life. Just this quotient when we can claim that we are the most valuable creatures on earth.

Social intelligence is intelligence that comes from the heart, makes us creative when we are faced with personal problems, and try to see the meaning contained in it, and finish it properly to obtain serenity and peace of mind.

Social intelligence makes the individual able to interpret each of its activities as worship, for the sake of mankind and God’s beloved.

According to Gardner, social intelligence is defined as the “ability to notice and make a distinction among other individuals and, in particular, among their moods, temperaments, motivations, and intentions.

According to Goleman, social intelligence is defined as “being intelligent not just about our relationship but also in them”

His definition includes both the capacity to be socially aware (with components of primal empathy, atonement, empathetic accuracy and social cognition) as well as the ability to develop Social skills or facilities (including components of synchrony, self-preservation, influence, and concern).

Definition of social intelligence focuses on the ability to learn to do something rather than being competent at it.

Thus, cognitive/thinking, effective/Emotional, and conative/volitional components are important because they provide the foundation for the establishment and maintenance of interpersonal relationships.

Therefore, any attempt to develop social capacity or intelligence into social competence will need to consider these domains as well.

However, there is no debate that people have varying abilities to learn and develop Social skills. 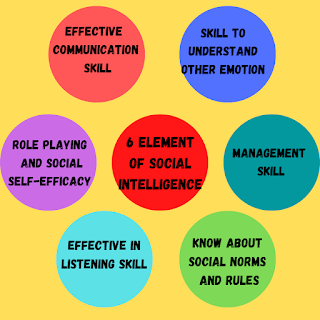 1. Effective communication skills- Socially intelligent people are tactful and appropriate in what they say. Their conversation skills are brilliant.

They know very well that under what circumstances what to say? How much louder the voices should he have in front of which man? What to hide and what to say?

This means they know very well about what, when, and to whom they communicate.

They are aware of their communal rules and regulation and the impact of society on them.

This means that you live in a mixed society, where different communities live with each other. He knows how to survive there.

He closely observes all the norms and rules. So he can manage the situation. The best example is politicians.

4. Roleplaying and social self-efficacy- As mentioned above politicians are the best example of socially intelligent people.

They know how to play different social roles. Allowing him to feel comfortable with all types of people.

As a result, the socially intelligent individual feels socially self-confident and effective.

You observe that when there is a social crisis politicians are working as frontline soldiers to remove the social crisis.

5. Management skills- Persons with social intelligence are concerned with the impression they are making on others.

They engage in making a delicate balance between managing and controlling. They convey to others that they handle all situations.

The image he portrays to others and being reasonably authentic and letting others see the true self.

This is perhaps the most complex element of social intelligence. Need patience and hard work because it takes time.

No one is stopping you from finding success.

1. Broad inclusive approach– Socially intelligent people do the work of inclusion in society. He understands every caste, race, and sex demand and needs

So he is capable of taking decisions on behalf of them. People also believe in them. It is like in the democratic system.

We elect a leader from us. Who represents our voice in front of the government. We select that person from between us. Who is mastery in social intelligence? Like politicians.

2. Flexibility- Mastery in social intelligence makes you flexible. By understanding yourself and the emotions of others.

You easily manipulate the situation according to your wants. But for this flexibility is essential. Without inculcating flexibility in our behaviour. We cannot find mastery in social intelligence

So, socially intelligent people are flexible by nature. They are like a bamboo tree how much we bend it. It will not break. But when we will release them, they regain their position.

3. Tolerance- Socially intelligent people are tolerant. Because they understand the feelings of other people or the society.

So they do not react to any matter. Which is unexpected and bad. Because he knows about it.

They wait for the right moment to react to that matter. And when the time comes, answer.

For example, everyone knows that. People always question you about the things that you do not have. And something in which you are weak. Like, if you don’t have a job.

People ask about your job. And if you are weak in work or other social activities. People always ask questions about your performance.

If you are socially intelligent, you will distract your mind from the trolls of people. And will maintain focus on enhancing your performance. To give the right answer at the right time.

4. Self-awareness-  Many times you are surprised that in the following situation, how did I react? Means you’re not expecting that on a simple NO. How will you react violently?.

Self-awareness is the skill that teaches us. How to control our emotions and our actions in a particular situation.

Self-awareness is the first stage towards the journey of mastery in social intelligence. Because if you do not know about yourself how you know others.

So, socially intelligent people are self-aware because they know about their feelings and on this basis try to understand the feelings of others.

They never lose their poise in any condition. How much pressure the feel of society and family. But they never break down.

For example, in 2018 supreme court of India declare that section 377 was unconstitutional.it violates the fundamental rights to autonomy, intimacy and identity, thus legalizing homosexuality in India.

The reason behind the decision of the supreme court may be. On humanitarian grounds, the constitution of India gives us the right to live with dignity. Homosexual people are also human they are not alien. So why do we discriminate against them? This is wrong.

On social grounds, our society is very narrow-minded and they do not accept changes. But change is a natural phenomenon. So when the supreme court observes that now the time comes that society accepts the changes. Because various countries of the world declare legal homosexuality.

On natural grounds, according to nature sex is essential for reproduction for raising our breeds. But according to new study sex gives more. It is the means of satisfaction and fulfilling biological needs.

So, in the above three needs. Homosexuality fulfils two needs. So why do we stop them? Because in reproduction they have no interest.

Transgender and infertile women or men are also who cannot do reproduction.

So why do we discriminate against them based on nature? While we all are one God product

So according to me the judges of the supreme court are socially intelligent people. They are aware of homosexual society needs and demands. And considering the above three grounds in their mind. While deciding for the judgment.

They raised a new breed of leader who carried forward his vision. Like, Raja Ram Mohan Roy a great social reformer of India.

His vision preached the unity of God, did early translations of Vedic texts into English, co-founded the Calcutta Unitarian Society and founded the Brahmo Samaj.

The Brahmo Samaj played a major role in the reform and modernization of Indian society and carried forward his vision in society.

He successfully campaigned against the practice of Sati, the practise of burning widows.

8. Ability to go against conventional- As I mentioned above Raja ram Mohan Roy was a great social reformer of India.

His journey to reform society was not so easy. His way was full of a fork. He was fighting on the two front at once. One from his countryman and the other from the government.

But his social awareness helped him to understand the situation of widows in society. Which gave him the courage to fight for them and brought change.

The plight of women in society hurts him so much from the inside. That he raised himself to fight for them.

He raised his question in front of the government and society. Why do they not solve their problems?

The best example of that is politicians. They know about all the communities and societies that belong to their constituency.

So, they are well aware of all the traditions and cultures of the different communities. If a conflict arises between these communities.

He managed it by his ability to connect between different cultures of community and find a way. On which Both parties can satisfy.

11. Ability to create harmony- Socially intelligent people have a desire and capability to cause as little harm as possible to promote wellbeing and harmony for all.

As I mentioned above, the ability to connect between diverse things and see all holistically. Make the person a peacekeeper. Which helps him to resolve the conflict and maintain peace.

10 Habits that Improve your Mental Wellbeing