The power of silence. From childhood, we listen to that. Do not be silent raise your voice. Against wrong, for our right, or answer to anyone. Silence is a sign of weakness. This is right,But does shouting loudly do us justice, correcting the wrong, and satisfy us that, we give the best answer? According to me in most cases, it is counterproductive. Because being louder is make a unit of measurement of our character in society. Because we live in a civil society. Where people do not look at the person with good eyes. who makes a lot of noise.

Adopting silence here will bring us three benefits. First, it keeps us calm to think properly about any situation. Second, if answering is essential then, we give it politely or register our grievances politely. Third, it saves your energy.

In the article, I am going to explain what is silence? Why is the same best answer? The power of silence.

What is silence According to me, silence is the absence of audible sound in the environment. Silence is infinity means silence is not bounded or related, not measured, not to be assumed.

Silence is the absence of mediums used for communication with each other. silence has several social uses

In danger by Joseph Jordania (Australasian-Georgian ethnomusicologist) has suggested that in social animals including humans. Silence can be a sign of danger. It is the tool that neutralizes power. And it is used against any type of inequality, exploitation, and injustice

In spirituality we talk about silence then our tough link us to ascetics in dhyana mudra. But silence is a value which in hill our body internally. All religions emphasize the power of silence.

Commemorative silence is a common culture in the world that commemorate a moment of silence. So, I think the reason behind silence is to stop all the thinking about your do or do not. And remember them

In debate, silence is the best answer to the stupid question. Help delay confrontation. And make you intellectual between garrulous?

So silence is beyond this. In the definition mode of what is silence

“silence is the value which helps to integrate other values (energetic, calm, self-control, leader and many more ) in the life of people to make him great” 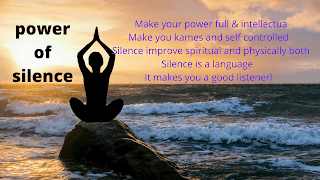 The Power of silence.

1. The power of silence makes your power full & intellectual–

Silence is our patience. Which give us the power to tolerate the hard time of life. And everyone know that patience is the ornament of powerful men.

I am the person belong to land of  Mahatma Gandhi. Who win the battle of freedom from his weapon called ” non-violence” in hindi “Ahinsa”.  And for non-violence patience is essential. And patience is come through silence.

Once a man asked a question to Hazrat Ali (the last Khalifa). How can a foolish man come out from the gathering of intellectual without losing his honour?

He replied by keep silence. Because being silent is a sign of intelligence and chattering is a sign of foolishness. So to silence makes your powerful and intellectual.

2. The power of silence makes you Patience-

Silence helps you to inculcate patients. Many people think that retaliation is the best way to give any one answer. But it is not possible for all. Because all are not capable in it then what he does.

The word patience has come in light of how you show patience by silence. But many people raise the question that. If I am weak, if do not give answer?

No, you are not weak but you are intelligent and powerful. According to a study if anyone sarcasm, or taunt you the prime motive of the person is to see the retaliation on his speech.

Your anger and your exhaustion make him satisfy. And if you do not give any reaction and avoid it. The same anger and exhaustion you find in him.

Because he expected this type of reaction on behalf of you. So that is the best answer. Means you did not give an answer. But your silence give your answer. Try it please a great result you find.

3. The power of silence make you calm and self controlled–

What you need in your worst time? Support of your family and well-wisher. Their moral support and mental support. These are the supports that anyone needs. Of the two supports that I discuss above. One support are internal and other is external.

So almost first to fight with catastrophe situation of life our internal support is crystallized. So the silence comes into the light to help to merge these supports. Because of silence, the two value inculcate in human behavior one is calmness and second is self-control.

What did calmness and self-control do?

These two help you when your anger quells the idea of suicide or wanting to kill someone. It gives you the light of hope that today is bad but tomorrow is mine.

4. The power of silence improves you spiritually and physically both-

I explain to take the example of Microsoft CEO Bill Gates famously conducting “think weeks “ twice a year, during which he would isolate himself.

This clear that to think big you need silence. Silence makes you think deeply and do introspection. Which helps you to enhance your spiritual power. And if you are mentally strong you are can be physically strong.

5. Silence is a language–

This topic makes you confused. And raised a question in your mind that. May be silence treated as language. My answer is yes. Which I can prove to take an instance. Assume there is a meeting in the family or your colony.

All are assembled there put her/his view. So it is agreeable that some are in favour or some are not. So there are sought there to prove taht. I am right and other are wrong.

Which arises confrontation between them. So by using the trick of silence. You can also give your reply without scouting Without any confrontation. If you agree then sit silently. And If you do not. Stand up and move out of from the meeting.

The organizer of the meeting understands that you do not agree with the decision, which helps you to avoid the risk of confrontation.

6. The power of silence makes you a good listener-

If you have patience, calmness, self-controlled, and benevolence this value self inculcate in your personality. Because these are the child value of silence value.

And being a good listener you magnet some other personal development skills like leadership skills, motivational skills, intellectual personality, etc 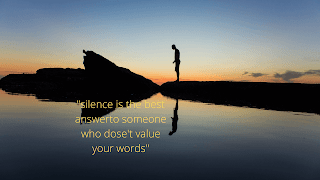 Why it is best to answer?

As I explain above that it is not essential that always answer loudly. Sometime it’s also given silently. Silence is used as a language to give the best answer.

I prove it through the story of king chitsatru the king of Champa Nagari and his minister shubudhi follower of Lord Mahavira.

One day king calls his cabinet on launch. While doing the launch king praised the meal. All cabinet members agree to the king’s praise. But minster shubudhi was silent. King noticed that, so he asked him. Why he did not give any reaction.

shubudhi answered modestly, that every substance in the world is changeable. We like or dislike it depending on its combination and circumstances. So, why do we praise it or condemn it?

One day king goes for a walk with his cabinet. They reach near a very dirty pond. And stench comes out from it. King talks to shubudhi the water of the pond is very dirty and stench far away.

This time minister replied with the same answer. king was very furious at the minister’s reply. And he called dirty thing is never pure.

So the minister wisely handled the situation and keep silent rather than give an explanation. After a few days, servants serve a very sweet and cold glass of water to the king.

He is very impressed by the test of water. And asks the servant where this water comes from. The servant replies minister shubudhi send this water for him from his house.

He called shubudhi and asked where he gets this water. He replies from the same pond. Which is dirty and stenches far away. He looks suspiciously at subudhi and asked why he joking. But shubudhi patiently answers my lord. Please come to my home and view all the filtration process from your eye.

So,King will go to his house. And saw how dirty water was purified. Shubudhi installed three, pitchers, one upon another. Each are interconnected to the other with a small hole on the bottom. And the third pitcher connected with a pipe to another pitcher.

Which is on the fire. Due to boiling of the water the pitcher is full of water vapour. And the water vapour change in to water. And from there pure water collects in the pitcher which is connected to the pipe.

Know he mixes some perfume in it. And serve the water to the king. To see all those processes kings memorize his words. That dirty thing is never pure.

And also recall the words of shubudhi that every substance in the world is changeable. We like or dislike it depending on its combination and circumstances.

So in the whole story. We see how shubudhi uses silence as a tool. To delay an argument with the king and keep patient to prove his word. And wait for the right time to give the answer. So, that silence is the best answer

So according to me silence is always a best answer. Because it save us from the confrontation. It save our energy and save from the mental stress.

Its impact is more then noise. It more lethal than noise. Because noise hurt us externally but silence hurt internally. We can avoid noise by moving away from noise. But in case of silence we can not do it. Because it will be with us and directly impact on our heart and mind.

Through out the discussion on the topic the power of silence. One thing which we understand is that silence is a antidote for many of our miseries.  Silence make us powerful, intelligent, patience full, calm, and self-control.

Where we cannot answer them louder. But we want to give answer. To give the message to him. That I have to disagree with you. In that case silence is the best answer.

Silence works in 80% of circumstances of daily life. But in 20 % you have to be louder especially. Specially when you deal with social problem or with our external issue.

For instance, if you show there is wrong doing with women, domestic violence, or other social problems. You have to be louder and louder. But you should not taking the path of violence. like mahatma Gandhi.

So I hope that I have cleared my view. But I expect your view on the topic in the comment section . Please comment, your comment is valuable for us